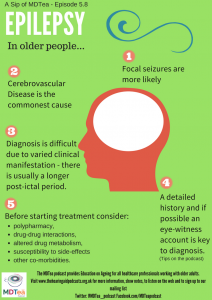 Click here for a pdf of the sip of MDTea poster

Click here for a pdf of the show notes

Join us to discuss topics raised in the episode and spread any resources you may have! 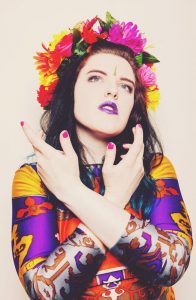 This week’s gallery is:

She has been very helpful to us and allowed us to play her music royalty free – so please have a look at her music and buy her albums!

For some information about Alice have a look at this here and here is a photo of the lady herself.

Epilepsy is diagnosed when someone has suffered more than 1 unprovoked seizures.

Patient perceptions of the referral of older adults to an epilepsy clinic: do patients and professionals agree who should be referred to a specialist? 2014 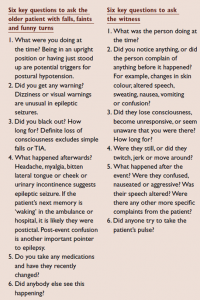 Review Special considerations in treating the elderly patient with epilepsy. 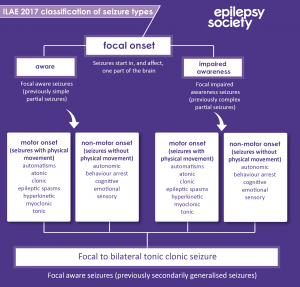 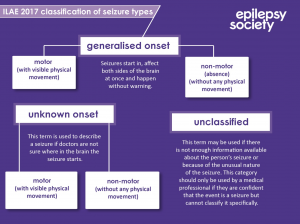 (a)    Stroke – 20-50% of epilepsy in the elderly is related to cerebrovascular disease. Approx 10% of patients are at risk of developing seizures within 5 years

Seizures can occur with infarcts, ICH and SAH. Haemeorrhagic strokes are more likely to be associated with seizures than infarcts. About one-third of patients with early one half of patients with late post-stroke seizures develop epilepsy.

Predictors of seizures with ischaemic strokes include severity, large size, embolic cause and involvement of the cortex, hippocampus or multiple brain areas.

(c)    Trauma – head injury accounts for up to 20%of epilepsy in the elderly.

(g)    Seizure mimics – Syncope: can be associated with incontinence, injury and slow recovery (all features of seizures)

Focus on key points again about the history – Key questions as above Detailed history – patient and if available an eye witness – as above.

Determine if epileptic or non-epileptic

If events are felt to be epileptic identify provoking factors and treat them.

Unprovoked seizures – treatment depends on whether patient has had a single seizure or recurrent seizures (epilepsy).

Antiepileptic drugs are the mainstay of treatment. However, their use in older patients is complicated by several factors, including altered pharmacokinetics and increased risk for adverse effects and drug interactions.

The choice of drugs should be individualised for the patient and clinicians should consider:

Evidence for medications in older people:

In one study, lamotrigine was as effective as and much better tolerated than carbamazepine.

However, this difference was almost completely negated by substituting a controlled-release formulation for the standard formulation of carbamazepine using an identical study design.

In the Veterans administration study, lamotrigine, gabapentin, and carbamazepine were compared using a randomised, double-blind design.

In general, sodium valproate and levetiracetam are favourable due to a number of factors e.g. no TDM required and better side effect profile.

According to the few published statistics on this matter, elderly patients with epilepsy seem to have better outcomes with pharmacological treatment than younger patients with epilepsy. Treatment is usually lifelong as any causative factors provoking the development of epilepsy in old age are not likely to remit over the next few years of seizure freedom.