In this episode we look at the common problem of Atrial Fibrillation (the irregularly irregular heart arrhythmia). 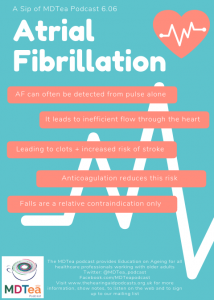 pdf of Sip of MDTea here

Click here for a link to the CPD log for series 6 and we’ll automatically email you a copy for your records.

Thrusters on a Monday? Yes please! She had sig diff w/sit to stand tx prior to starting HH PT and now she’s repping out 10 of these. All about those multi-modal interventions! Check out my most recent podcast on @seniorrehab FB page. #HomeHealthPT #oldNOTweak @HomeHealthAPTA pic.twitter.com/kN0jTWfEhQ

To know when to refer a patient for further investigation

Atrial fibrillation is a heart condition that causes an irregular and often abnormally fast heart rate.

Its disordered electrical activity in the atrium which leads to too many electrical impulses trying to get through the AV node. The AV node cuts many out but the result is an irregular ventricular heart beat.

Leads to an irregularly irregular pulse.

This is the most common tachyarrhythmia in older people

Despite good progress in the management of patients with atrial fibrillation (AF), this arrhythmia remains one of the major causes of stroke, heart failure, sudden death, and cardiovascular morbidity in the world. Furthermore, the number of patients with AF is predicted to rise steeply in the coming years.

Increases risk of ischaemic stroke by 5-6x (but can use scoring systems to try and work out a person’s individual stroke risk) – in RCTs the stroke risk is about 1.5%.

Not only is AF a major risk factor for stroke, but when strokes occur in association with AF, patients suffer increased levels of mortality, morbidity and disability with longer hospital stays compared with stroke patients without AF  . 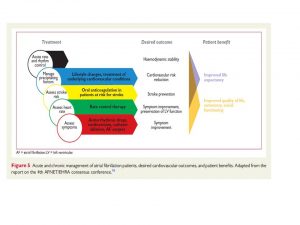 How to make the diagnosis?

“Give me X number of causes of AF”.

Symptoms – may be many, may be none!

May need to go to hospital if

Rate control – may be all you need to do to remove the symptoms – but as compared to stroke prevention and rhythm control there is relatively little evidence here.

May need emergency admission to hospital for

If need initiation of antiarrhythmic drug

When to offer rate or rhythm control (From NICE AF 2014)

1.6.1 Offer rate control as the first‑line strategy to people with atrial fibrillation, except in people:

Also HASBLED can identify risk factors that you can modify so you could stop NSAIDS or Aspirin, control hypertension and reduce alcohol intake to lower the bleeding risk

Can use SPARCTOOL.com (can download to phone) will compare the HASBLED and CHADS2VASC and give a Number needed to treat and Number needed to harm of Warfarin, Apixaban, Rivaroxiban, Edoxaban, Dabigatran

Choosing antithrombotic therapy for elderly patients with atrial fibrillation who are at risk for falls. Arch Intern Med. 1999 Apr 12;159(7):677-85

What if Warfarin control of poor? (consider DOAC)  if:

Advantages and Disadvantages to various DOACS each is really an individual decision to be taken with the patient.