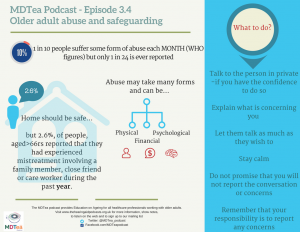 Click here for a PDF version of the infographic

Click here for a PDF version of the show notes.

“Elder abuse is a single or repeated act, or lack of appropriate action, occurring within any relationship where there is an expectation of trust, which causes harm or distress to an older person.”

This type of violence constitutes a violation of human rights and includes physical, sexual, psychological, emotional; financial and material abuse; abandonment; neglect; and serious loss of dignity and respect.

The scope of the problem

Although rigorous data are limited, a study provided prevalence estimates of the most common types of abuse in high- or- middle-income countries:

There is a prevalence of psychological abuse, usually through intimidation or coercion linked to financial abuse.

Perpetrators of abuse or neglect are often people who are trusted and relied on, such as family members or care staff.

Institutional abuse: Not much data. A survey of nursing-home staff in the United States of America, suggested rates may be high:

Crimes against older people often take place in a context of abuse and mistreatment.

A UK study in 2007 showed that 2.6%, of people, (about 227,000) aged 66 and over living in private households reported that they had experienced mistreatment involving a family member, close friend or care worker during the past year.

Over half of situations of abuse involved partners.

(Quoted from the WHO Factsheet)

Anyone can be at risk but some examples of people who might be at risk include:

Risks at the individual level include poor physical and mental health of the victim, and mental disorders and alcohol and substance abuse in the abuser. Other individual-level factors, which may increase the risk of abuse, include gender of victim and a shared living situation. While older men have the same risk of abuse as women, in some cultures where women have inferior social status, elderly women are at higher risk of neglect and financial abuse (such as seizing their property) when they are widowed. Women may also be at higher risk of more persistent and severe forms of abuse and injury.

A shared living situation is a risk factor for elder abuse. It is not yet clear whether spouses or adult children of older people are more likely to perpetrate abuse. An abuser’s dependency on the older person (often financial) also increases the risk of abuse. In some cases, a long history of poor family relationships may worsen as a result of stress when the older person becomes more care dependent. Finally, as more women enter the workforce and have less spare time, caring for older relatives may becomes a greater burden, increasing the risk of abuse.

Social isolation of caregivers and older persons, and the ensuing lack of social support, is a significant risk factor for elder abuse by caregivers. Many elderly people are isolated because of loss of physical or mental capacity, or through the loss of friends and family members.

Socio-cultural factors that may affect the risk of elder abuse include:

Within institutions, abuse is more likely to occur where:

There are no eligibility criteria. However an adult who needs safeguarding is:

This definition means that the Local Authority, under the Care Act, 2014, have a duty to follow up any reported concerns regardless of whether there is actual evidence or a suspicion that the person may be subject to abuse.

Together these principles shift the way an individual is safeguarded to a person-centred approach, with the aim of achieving the outcomes the person wants.

It is important to remember that abuse can happen anywhere, for example in a persons own home, a care home or residential home, a hostel, in supported living, in homes where people have shared living arrangements or in hospital.

The Care Act, 2014, identifies 10 categories of abuse, for all the categories, many of the indicators that abuse may be occurring are well known, but some may be less understood or obvious. The list below is now exhaustive and it is important to remember that an individual can be subject to more that one area of abuse at any one time.

Evidence or suspicion of any one of the above indicators should not be considered as evidence that is occurring, but should alert any health care or social care practitioner that further assessment should be undertaken.

At a glance 69: Adult safeguarding Types and Indicators of abuse

What to do if you suspect it

In order to respond appropriately where abuse or neglect may be taking place, anyone in contact with the adult, must understand their responsibility and have access to advice, support and practical and legal guidance, including understanding local inter-agency policies and procedures.

All organisation’s have policies and procedures or agreed ways of working, which give guidance on prevention and procedures to follow if and when abuse or neglect has happened or is suspected. Your manager or a senior member of staff should always be your point of contact for any questions or concerns you might have.

If you are worried, that someone is experiencing abuse of neglect. What should you do?

Findings from serious case reviews have sometimes stated that if professionals or other staff had acted upon their concerns or sought more information, then death or serious harm might have been prevented.

Local authorities and courts as public bodies have a duty to consider Human Rights when making decision about an individual’s welfare. Where rights are conflicting they must strike a balance and act proportionately- find the least restrictive option for the individual.

The emphasis is on sensible risk appraisal, not risk avoidance, taking into account an individuals’ preferences, histories, circumstances and life-styles to achieve a level of acceptable risk. As Lord Justice Munby said: “what good is it making someone safer if it merely makes them miserable?”
What if a crime has been committed?

Many of the types of abuse mentioned are also a crime

If it is believed a crime has been committed it is the role of the police to lead the investigation, and if necessary interview the alleged victim, perpetrator and witnesses.

It is important to remember that Safeguarding an older person is complex, The Care Act balancing the right to be safe with the right of the individual to make informed choices, whilst ensuring that the person’s wellbeing is promoted including, taking into consideration their views, wishes, feelings and beliefs when deciding on any course of action.

Curriculum Mapping: This episode covers the following areas (n.b not all areas are covered in detail in this single episode):

Feedback We will add feedback to this as we receive it! The website will have the most up to date version always available: www.thehearingaidpodcasts.org.uk/mdtea Find Us! To listen to this episode head to our website, itunes or stitcher. Give us feedback by emailing us, via twitter or facebook. Check out our cool infographic A sip of… summarising 5 key points on topic. It’s made for sharing!