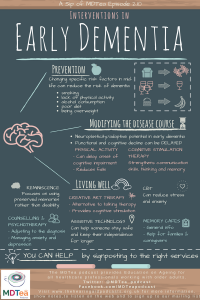 This episode will explore interventions that can delay cognitive decline in early dementia, and help patients and their families to live well. We also look at lifestyle changes in mid-life that may help to prevent dementia.

We usually just think about the physical outcomes of increased muscle strength, better balance etc. in terms of falls risk reductions, but there is evidence that physiotherapy interventions have effects on many systems. Specifically here physical activity has positive effects in slowing cognitive decline.

Clock yourself is an app-based training programme which actively combines cognitive training with reaction training.

Key point: there are very few fixed inevitabilities in a person’s life course. Even diagnoses perceived to be fixed still have the potential for modification through actions and behaviours.

Studies looking at risk reduction through exercise showed greatest risk reduction in those expressing the apoe e4 allele (a gene related to the progression of Alzheimer’s disease). Not in all studies so not definitive. Physical activity reduced admissions for men with dementia but not women.

The risk of dementia, disability and frailty will sometimes be determined by factors that can’t be changed, such as inherited conditions or injury. But changing specific risk factors and behaviours can reduce the risk of dementia, disability and frailty for many people. These changeable factors – smoking, lack of physical activity, alcohol consumption, poor diet and being overweight – are the focus of the NICE guideline.

There is a lack of evidence on whether dementia can truly be preventable or whether it is only the onset that can be delayed, and on which types of dementia are most influenced by modifiable risk factors.

Neuroplasticity is the neurological ability to regenerate for example as seen in stroke rehabilitation. It is the suggested mechanism for how the above interventions may work, and therefore it makes sense therefore that interventions should be targeted at earlier life behaviours before diagnosis, and in the early stages of dementia, when they may have more effect.

A broad term used to describe different ways to support people to overcome challenges and maintain good mental health. These help predominantly in early stages of dementia but also throughout someone’s life with dementia, and are for patient and their families.

Deciding on the right psychosocial interventions is personal and depends on an individual’s needs and preferences.

The table below summarises the different interventions available and the areas they can help with:

Efficacy of Souvenaid in mild Alzheimer’s disease: results from a randomized, controlled trial

A systematic review of RCTs suggested that supplementation does not show effects on functional ability, but small improvement in memory. Further studies are ongoing.

The efficacy of supplementation with the novel medical food,Souvenaid, in patients with Alzheimer’s disease: A systematic review and meta-analysis of randomized clinical trials.

OT integrated into early memory rehabilitation in project in Belfast and Scotland.

SALT provision for people with dementia

Key point : Family and carers of people with dementia are at high risk of physical and mental illness as a consequence of caring and they require attention and support. Caregivers have a right to an assessment under the Care Act.