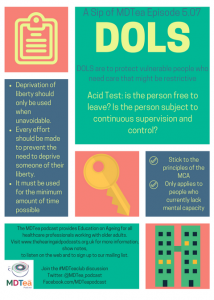 Click here for a pdf of the sip of MDTea poster

Join us to discuss topics raised in the episode and spread any resources you may have!

The First Law of Admission Avoidance describes the need to escape the gravitational pull of the hospital (although if you’ve got a front-door frailty unit, you’ve got a zone where the First Law may not necessarily apply) #endPJparalysis #PatientCenteredCare #bgsconf pic.twitter.com/QFog3Ca038

Conjouring a cunning plan to keep a patient at home (rather than admitting them) can take hours and hours and hours, and multiple phone calls, voicemail messages, and waiting for calls back. Hence, I present The Second Law of Admission Avoidance from @COTEBangor ….HT @gothwag! pic.twitter.com/TNww1Hftc3

But there are others… check out #thishastochange

The Deprivation of Liberty Safeguards is the procedure prescribed in law when it is necessary to deprive of their liberty, a person who lacks capacity to consent to their care and treatment in order to keep them safe from harm.

Article 5 of the Human Rights Act states that “everyone has the right to liberty and security of person. No one shall be deprived of his or her liberty [unless] in accordance with a procedure prescribed in law”.

Sometimes thought when someone is not aware of what is happening you might need to provide them care or treatment that goes against this. DOLS is in place to ensure that this is monitored correctly.

Deprivation of liberty should only be used when unavoidable, and every effort should be made to prevent the need to deprive someone of their liberty. Equally, it must be used for the minimum amount of time possible.

What is a deprivation of liberty safeguard (DOLs)?

The Small Places blog: good summary of DOLS and this case

When does “normal care” become a “deprivation of liberty” is not always clear.

The MCA Codes of Practice states:

Is it a deprivation or just a restriction of liberty?

It may be difficult to tell whether a restriction on liberty is actually a deprivation of liberty requiring authorisation, within the wide range of circumstances that may occur. The Law Society provides some guidance to assist professionals decide whether a DOLs application is required as it can be hard to decide.

It has a list of examples of the type of restrictions on liberty found in care homes/hospitals or private dwellings and includes:

The courts have identified certain pointers, which suggest that someone is more likely to be deprived of their liberty, rather than just restricted when:

Reducing the risk of depriving someone of their liberty

As with any assessment, which involves working with a person where there are concerns about their capacity it is imperative that we remember the basic principles of the MCA (check out episode 1.6) and we ensure that every effort is made to support, a person to make their own decisions, before beginning a best interests assessment.

As a reminder therefore, the starting point of any assessment must be the 5 core principles of the MCA:

Not everyone who lacks capacity requires a DOLS and this must be assessed on a person by person basis – will any care provided be restrictive?

When can someone be deprived of their liberty?

This is the case when:

In March 2014, the Supreme Court issued a judgment in relation to a deprivation of liberty, in the cases of P v Cheshire West and Chester Council and another and P and Q v Surrey County Council, which clarified what may constitute a situation whereby someone can legally have their liberty taken away, it became widely known as ‘the acid test’.

1. is the person free to leave?

This is not about whether the person expresses a wish to leave but about what the home/hospital would do if the person tried to leave.

2.  is the person subject to continuous supervision and control?

In addition it is important to consider whether:

a) The person can consent to the level of supervision and control; and

b) Whether the placement is ‘imputable’ to the state i.e. the state is held responsible

In addition the judgement identified that in all cases, the following are not relevant to the application of the test:

How is deprivation of liberty authorised under a DOLs?

What are the assessments and who does them?

At least two trained professionals are involved in the assessment:

This is most often a qualified social worker, but it could be a nurse, occupational therapist or psychologist. This person undertakes an assessment to decide if the individual is being deprived of their liberty. They can also advise on how to reduce the restrictions on the person and how long the authorisation should be for. The BIA is appointed by the Supervisory Body.

This will be a doctor, usually a psychiatrist, geriatrician or general practitioner with experience in dealing with mental disorders. They will have had extra training in the DOLs process.

The Mental Health Assessor decides if the person is suffering from a “mental disorder” or not. This covers a range of conditions, but includes dementia, long-term effects of brain injury and a learning disability.

The assessment needs to determine whether the conditions are met to allow the person to be deprived of their liberty under the safeguards, which is determined by using the following six assessments:

a ‘mental disorder’ within the meaning of the Mental Health Act.

deprived of their liberty and whether it is in their best interests.

If it is thought that the individual needs care or treatment for their mental disorder in hospital, then the Mental Health Act has to be used and DOLs no longer applies.

If any of the conditions are not met, a deprivation of liberty cannot be authorised.

If a standard authorisation is authorised it cannot be for longer that 12 months.

Conditions to the DOLs authorisation set by the BIA (Best Interests Assessment):

The best interests assessor may recommend that conditions should be attached to the authorisation. For example they may make recommendations around:

In recommending conditions, best interests assessors should aim to:

A relevant person’s representative must be appointed as soon as possible this can be either:

The person and their representative can request the authorisation to be reviewed at any time, to see whether:

The person and their relevant person’s representative have a right to challenge the deprivation of liberty in the Court of Protection at any time.

If the person has an unpaid relevant person’s representative, both they and their representative are entitled to the support of an IMCA. It is good practice for supervisory bodies to arrange for an IMCA to explain their role directly to both when a new authorisation has been granted.

The Managing Authority has a duty to do all it can reasonably do to explain to a detained person and their family what their rights of appeal are and give support.

If the RPR cannot continue in their role for any reason a new RPR must be appointed.

The case of AJ v Local Authority [2015] EWCOP 5 gives guidance about the role of the RPR, IMCAs and the local authority in ensuring that a person lacking capacity is able to challenge their deprivation of liberty. A relative appointed as an RPR did not communicate the resident’s views about not wishing to be placed in residential care as they disagreed with them.

The judgment found the local authority should have appointed an alternative professional RPR because they knew about this disagreement.

Deprivation of liberty in domestic settings

In Cheshire West, the Court confirmed a deprivation of liberty can occur in domestic settings, if the State is responsible for imposing the arrangements.

This includes a placement in a supported living arrangement in the community.

Where there may be a deprivation of liberty in such placements, it must be authorised by the Court of Protection.

In Staffordshire County Council v SRK & Another [2016] EWCOP 27, this principle is restated. The court decided that a 24 hour privately funded and arranged care package for someone lacking mental capacity in their own home came under the deprivation of liberty protections, as it was sufficiently attributable to the state.

What happens if authorisation is refused?

If any of the criteria for the six assessments are not met, the supervisory body must refuse an authorisation request.

The managing authority must ensure then ensure that the person’s care is arranged in a way that does not amount to a deprivation of your liberty.

The supervisory body, or a relative, or anyone else who is commissioning the care, has a responsibility to purchase a less restrictive care package to prevent deprivation of liberty.

If the BIA does not agree to the DOLS paragraphs 4.72 and 4.73 of the Deprivation of Liberty Safeguards Code of Practice states:

The best interests assessor must provide a report that explains their conclusion and their reasons for it. If they do not support deprivation of liberty, then their report should aim to be as useful as possible to the commissioners and providers of care in deciding on future action (for example, recommending an alternative approach to treatment or care in which deprivation of liberty could be avoided). It may be helpful for the best interests assessor to discuss the possibility of any such alternatives with the providers of care during the assessment process

The right to advocacy

If there is no appropriate family or friend who can support the person during the assessment procedure for a DoLS authorisation, an Independent Mental Capacity Advocate (IMCA) must be appointed by the SB. It is the responsibility of the MA to inform the SB, that support is required at the time of the request for the assessment.

An IMCA is an independent person with relevant experience and training who can make submissions to the people carrying out the assessments and, if necessary, challenge decisions on their behalf. Their role is to  find out information about the persons for example their beliefs, values and previous behaviour, to help assess what is in their best interests.

Taking a case to the Court of Protection

The Court of Protection was created by the Mental Capacity Act 2005 to oversee actions taken under the Act, including those relating to DOLs, and to resolve any disputes involving mental capacity.

A case is usually only taken to the Court of Protection if it has not been possible to resolve the matter with the MA and SB, either by asking for an assessment to be carried out or a review of an existing authorisation. This may be in form of a formal complaint.

The following people can bring a case to the Court of Protection:

Provides an explanation of the Act and the obligations of those, including health professionals, caring for people who lack capacity.

This episode covers the following areas (n.b not all areas are covered in detail in this single episode):