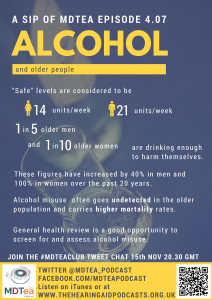 Addiction (termed substance dependence by the American Psychiatric Association) is defined as a maladaptive pattern of substance use leading to clinically significant impairment or distress, as manifested by three (or more) of the following, occurring any time in the same 12-month period:

Early onset alcoholism. This term is typically used to describe people who have a life-long pattern of alcoholism. People in this group have suffered from alcoholism for most of their lifetime. These people are most likely to suffer from poor relationships with family, a decline in socio-economic status and a history of alcohol abuse in the family. Experts believe around 75% of elderly people suffering from alcoholism sit in this category.

Size of the problem

Difficult to really know – probably a lot higher than we expect or think.

Older people tend to drink less alcohol than younger people, but even so 1 in 5 older men and 1 in 10 older women are drinking enough to harm themselves. These figures have increased by 40 per cent in men and 100 per cent in women over the past 20 years.

From the RCPsych – Invisible addicts and the substance missuse guide in older adults. And from the USA the NCBI Substance Abuse Among Older Adults. Links to all these in the show notes.

One study (259 ppl in Philidelphia) published this year of city dwelling adults showed: Alcohol or substance abuse was reported by over 20% of respondents, with 3.4% of respondents engaged in maladaptive alcohol use. Alcohol use was predictive of depression, global psychological distress, and decreased quality of life.

Older People and substance use: the nurse’s role. Nursing in Practice

Substance misuse in older people – a guide from RCPsyh

How to assess – general approach

Or think about using the 5 A’s approach: (assess, advise, agree, assist and arrange) as a useful guide to practice

There are considerable opportunities for GPs to improve the quality of life for older people with alcohol misuse. This can be achieved by the use of both planned and opportunistic screening as part of a general health review, particularly when accompanied by mental disorders, as well as coexisting alcohol-related physical problems. Improving referral to secondary care services will also help provide a seamless approach to improving care for an older population that will continue to weigh heavily on primary care.

Why Does Alcoholism in the Elderly Go Undetected?

Alcohol and substance misuse is misunderstood in the elderly population and is on the increase due to many social factors.  More training for health professionals in contact with this complex cohort is a must as the cost implications to the NHS would be favourable as well as the outcome on a patient to patient basis.

A study from 2007 published in age and ageing shows:  in middle-aged and older men and women, moderate levels of alcohol consumption are associated with better cognitive health than abstinence.

Lang et al (2007)  Moderate alcohol consumption in older adults is associated with better cognition and well-being than abstinence.Age Ageing. May;36(3):256-61.

How this happens is not really clear but might be related to reduced inflammation.

Both moderate drinking and the MDP (mediterranean drinking pattern) were associated with a lower risk of falls and injurious falls in older adults. However, sound advice on alcohol consumption should balance risks and benefits.

Ortola (2017) Patterns of alcohol consumption and risk of falls in older adults: a prospective cohort study

Brief interventions work and we can all do these:

Substance misuse in older people – a guide from RCPsyh

A study compared 5-year treatment outcomes of older adults to those of middle-aged and younger adults in a large managed care chemical dependency program.

Inquiry into alcohol and substance misuse in Wales- 2016

“Triggers such as bereavement, retirement or divorce can often lead older people to a greater feeling of loneliness or isolation. A number of the services that may have helped to tackle this root cause, such as day centres or Meals on Wheels, have been suffering from cut backs as a consequence of funding pressures, a situation further aggravated by the loss of public transport routes that are vital to older people, especially in rural areas. For substance misuse support and treatment for older people to be most effective, it is essential that the issue is approached holistically, recognising the impact that cuts on what appear to be unrelated services may be having upon the well-being of older people.”

This episode covers the following areas (n.b not all areas are covered in detail in this single episode):