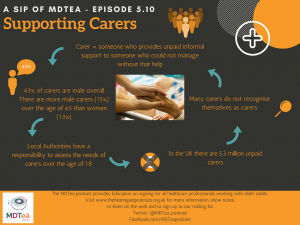 For a PDF of this sip of MDTea click here

For a PDF of the show notes click here

This is possibly the best and most useful article I have ever read in a journal.
Credit to Jason Walker – a consultant anaesthetist in Bangor. Do you know him @mmbangor ? If so, thank him profusely!!! pic.twitter.com/kEvIhnUzRT

Community care workers who have completed appropriate training are able to deliver a falls prevention exercise program to their clients as part of their current services. Further research is required to determine whether the program reduces the rate of falls for community care clients and whether integration of a falls prevention program into an existing service is cost-effective.

Older Carers in the UK

Iain to talk about Tronto’s framework for understanding the concept of care identifying four aspects to care: Caring about, taking care of, care-giving and care receiving.

In reality many people do not recognise themselves as a carer but identify as a husband, a wife, a daughter, a son, a friend, a view, which has the potential to impact on the figures.

We all can make a basic assessment of carers needs and refer onto appropriate, more qualified people.

According to the Office of National Statistics – census in 2011:

The Office of National Statistics. Full story: The gender gap in unpaid care

provision: is there an impact on health and economic position?

The rise in unpaid carers can be attributed to an ageing population brought about by improved life expectancy for people with long term conditions or complex disabilities, meaning more high level care need to be provided for a longer period of time.

The provision of unpaid care is an important social policy issue because without the input of unpaid care there would be a huge impact on the supply of care, which would be in a greater crisis that it currently is,

In addition to the shortfall in funding it is estimated that unpaid carers save the government £119bn a year (Buckner, 2011). The willingness of informal carer to continue in this role therefore places them at the centre of future social care planning.

Across the EU, care policies have tended to develop in isolation from policies for employment/equal opportunities. In the few countries (such as Finland and Denmark) that are beginning to take a more strategic approach to older people’s issues, the issue of support for employed carers is beginning to be addressed, partly because of the strong similarities to the business case for older workers – indeed, many working carers of older people are also older workers.

Impact of the caring role:

Government research on carers shows that people who provide a substantial amount of care tend to have lower incomes, poorer health, and are less likely to be in work than their counterparts (DH 2008)

The organization Carers UK states that; “The difficulties experienced by carers can be highlighted by the following three statistics:

As many carers struggle with the demands of their role, the first thing to get lost is often a carer’s sense of self, of their own wellbeing. They can experience an enhanced level of anxiety and stress, particularly if they are subject to:

Issues, which may be higher for those people caring for people with dementia, where there is also an additional emotional demand (Cheffings, 2003)

Asking the question “Overall how burdened do you feel?” is a useful, quick way to assess carer distress.

There may be particular stresses associated with caring for someone with mental health needs, for example:

It is important not to make any assumptions, regarding a carer’s capacity or willingness to either start to take responsibility for, or to continue to care for a person.

The Carers Trust and the Men’s Health Forum report ‘Husband, Partner, Dad, Son, Carer?’ looks into the experiences and needs of male carers to raise awareness of the needs of this group of carers.

The report found the following:

For those male cares who continue to work Carers UK (2014) found that:

“There is important evidence that working age men who do care, ………can face greater financial and workforce disadvantage. Whilst a greater proportion of working age men combine full-time work and caring, greater incidence of ‘partner caring’ and less part-time working mean that men are more likely to give up work entirely or retire early to care and are very significantly more likely to be in a household where no one is in paid work.”

Much of the research shows that cares are reluctant to access support both formal and formal. There may be a number of reasons for this including:

The Care Act, 2014, gives Local authorities (LA’s) a responsibility to assess the needs of carer’s over the age of 18, regardless of the type or level of care that the person is providing, or their financial affairs. The entitlement to this assessment IS NOT dependent on the cared for having had a needs assessment, or meeting the eligibility criteria for care in their own right.

To receive support the carer must be assessed by the LA as having ‘eligible needs’, the Care Act outlining that the persons caring role as likely to have a significant impact on the person’s wellbeing because of their caring role.

There are three questions the local council will have to consider in making their decision:

The Care Act (2014) states that all assessments must be carried out in a manner which:

When undertaking the assessment it is important:

The assessment should cover the following areas:

If the carer has ‘substantial difficulty’ in communicating their wishes, or understanding, retaining and assessing information during the assessment and there is no other appropriate person who is able and willing to help them then an independent advocate should be appointed by the LA.

Carers UK. 2016. Assessment your guide to getting care and support. [on-line] available at: http://www.carersuk.org/files/helpandadvice/4765/factsheet-e1029–assessments-your-guide-to-getting-care-and-support.pdf

The Office of National Statistics. Full story: The gender gap in unpaid care provision: is there an impact on health and economic position? [online]. Available at: https://www.ons.gov.uk/peoplepopulationandcommunity/healthandsocialcare/healthandwellbeing/articles/fullstorythegendergapinunpaidcareprovisionisthereanimpactonhealthandeconomicposition/2013-05-16

Skills for Care. 2012. The Common Core Principles of working with carer [0n-line]. Available at: http://www.skillsforcare.org.uk/Documents/Topics/Supporting-carers/Common-core-principles-for-working-with-carers.pdf